The Realme C35 is a fantastic low-budget phone.

The Realme C35 is one of the greatest budget camera phones of early-2022, with a 50-megapixel main camera that captures stunning pictures day or night with software and performance that punches beyond its weight. Some may find the design and display to be lacking, but given the device’s price, this is understandable.

Realme has established itself as a company to keep an eye on in 2022, with its GT 2 Pro and 9 Pro Plus smartphones delivering premium features to the mid-range market. The company now appears to be focusing on low-budget phones as well.

We were surprised by how much the Realme C35 felt like a mid-range device when writing this evaluation. It was easier to operate, had a more appealing appearance, and took far better-looking photos than many other phones at this price point. 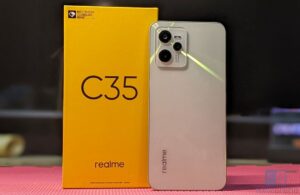 It also comes at a reasonable price. The Realme C35 is part of the company’s ultra low-end series of handsets, which aren’t normally anything special. That could also be said of the C31, which was released alongside the C35; nonetheless, this higher-end phone, while still being extremely affordable, is a phenomenally capable phone for the price.

The Realme C35 will easily make our list of the best cheap phones, thanks to its 50-megapixel primary camera. It features Sony’s IMX766 sensor, which is now found in a number of handsets (most notably Realme devices) and is excellent for low-light photography.

In well-lit or night-time scenes, the Realme C35 captures a lot of colour and light, putting it ahead of most others budget phones – sure, it’s not as good as the Samsung Galaxy-S21 Ultra, but it’s surprising enough to be able to make out what’s in pictures given the performance of other budget phones.

It’s simply a shame the handset doesn’t have more features — there’s no ultra-wide camera, and there aren’t any of the modes you’d expect, such as a Portrait mode on the front camera or a document-scanning tool. You can’t expect the moon at this price, though.

We were surprised by how responsive the Realme C35 felt in usage, especially given the presence of a Unisoc CPU on the specs list – these are notoriously slow – and the fact that budget gadgets are notorious for their sluggish performance.

The Realme is fine to use on a daily basis, whether you’re switching apps or scrolling through social media. Sure, you’re not going to have a wonderful time playing high-end games, but this device isn’t designed with gamers in mind. 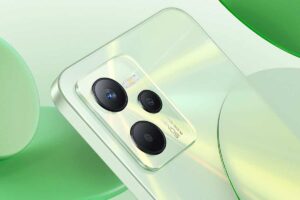 The Realme C35, like the majority of budget phones, will last a long time between charges – in our experience, closer to two days than one. Sure, charging isn’t very quick, but how many low-cost smartphones do?

You’ll notice from the pictures in this review that the Realme C35 is a distinct-looking phone, with a gleaming green tint that Realme calls Glowing Green (it’s also available in a black version). While we found it appealing, whether or not you will is a matter of personal preference. The C35, on the other hand, is not very comfortable in the hand due to its size and angular flat edges.

Every positive comment we’ve made about the Realme C35 has been accompanied by a qualifier or a minor critique. However, given the phone’s price, these flaws are simple to overlook. The Realme is a viable low-midrange smartphone that punches well above its weight class. It should, in fact, be the first stop for anyone looking for a new phone at this price point.

Price and availability of the Realme C35

Specifications of the Realme C35

The Realme C35, which was released alongside the more economical C31, went on sale in April 2022. 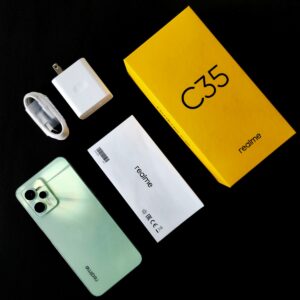 The C35 is the most costly Realme C phone we’ve seen, thanks to its price. Nonetheless, it is less expensive than the company’s primary line of numbered smartphones, as well as most rivals from Xiaomi’s Redmi and Motorola’s Moto G lines.

Design of the Realme C35

The vivid Glowing Green colour of the Realme C35 may catch your eye from afar – unless you’re looking at the black variant of the handset.

Closer inspection reveals a more conventional phone, with a USB-C port and 3.5mm headphone jack on the bottom, an volume rocker on the left side, a power button with embedded fingerprint reader on the right edge, and a rectangular camera bump protruding from the back’s plastic.

The fingerprint scanner was a little finicky to use, but we managed to get it to work by registering the same finger twice.

The phone is a little bothersome in the hand. Its large size and flat edges create an angular device that is comfortable to hold in the hand. As a result, we recommend getting a case.

Display of the Realme C35

The C35’s FHD (1080×2400) screen resolution surprised us, as most budget phones stick to HD. This means you’ll be able to access streaming services and play games at their native resolution. With a surface area of 6.6 inches across and a slight notch in the middle, the panel feels quite large. 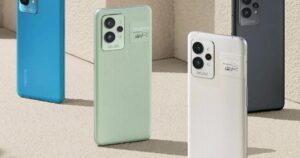 The resolution is remarkable, but the LCD technology and maximum brightness of only 600 nits are not. Although these are price-tier features, they do mean that colours are less bright and the screen is dimmer than we’d prefer.

We had problems viewing the screen in brighter environments on occasion — not often, but occasionally.

The main camera on the Realme C35 is a standout feature. The Sony IMX766 sensor, which is found in a number of phones, is used in this 50-megapixel f/1.8 camera, and it performs admirably.

It’s excellent at absorbing light, which has two advantages: it picks up colour well and captures more detail in low-light and night situations. Sure, the Realme won’t let you take iPhone-level night photographs, but we found the results to be surprisingly good for an phone at this price.

The Realme C35 is one of the greatest budget camera phones on the market thanks to its sensor, although it suffers from “one of” rather than “the” two minor flaws.

The other cameras, for starters, are inadequate. A 2-megapixel f/2.4 macro sensor and a 0.3-megapixel f/2.8 depth sensor are included, but neither adds much to the picture. We’d like to see an ultra-wide camera to add some versatility to the mix.

Second, the lack of HDR – or anything even close to it in the AI department – makes identical hues in certain pictures look indistinguishable. 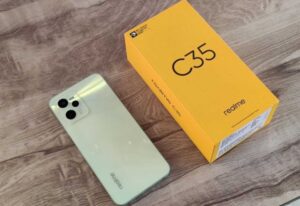 Night, Pro, and Panorama are among the modes available in the camera app’s mode list. However, there are an couple of noticeable omissions. There’s no document-scanning feature, and the front-facing camera isn’t capable of taking Portrait photographs.

The selfie camera itself is an 8-megapixel f/2.0 camera that’s perfect for the job, taking bright and clear photographs. However, don’t expect high levels of detail or subtle colour reproduction – or, as previously stated, a Portrait mode.

The camera app had an interesting quirk – or potentially feature – in that pictures appeared far better after captured than they did in the camera preview. While we’re used to an certain amount of variation, the Realme C35’s difference was noticeable. At the very least, the outcomes were preferable to the alternative.

Video recording can be up to 1080p at 30 frames per second, which is sufficient for any footage intended for social media.

Samples from the camera

Performance and specifications of the Realme C35

A Unisoc Tiger T616 chipset lies at the heart of the Realme C35’s functionality. If you’re familiar with mobile technology, the word Unisoc conjures up images of sluggish, stuttering phones; nonetheless, we didn’t find the C35 to be too bad.

The handset was easy to use, both for simple things like scrolling between menus and for more complex duties like utilising social networking apps and checking emails. Sure, that’s “budget phone swift,” not “luxury phone quick,” but the Realme feltn’t crash or seem slow to operate in our tests. 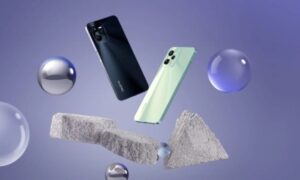 However, this isn’t a gaming phone. On this phone, high-end games will struggle to operate, so don’t expect to fire up PUBG Mobile, expect up the visuals to Ultra, and have a good time. You’ll be fine if your gaming habits consist primarily of Angry Birds, Candy Crush, and Pokémon Go.

The phone comes with the 4GB of RAM and 64GB or 128GB of storage; if you want your phones to last a long time with a lot of apps installed, the latter is the way to go. The C35 is merely a 4G phone, but it shouldn’t come as a surprise at this price.

Software for the Realme C35

Realme UI is layered on top of Android 11 on the Realme C35. Because many Chinese brands choose to utilise their own forks of popular open-source software, this is primarily a design modification. The menus on the Realme UI, on the other case, are extremely comparable to those on standard Android.

Whether you are on the main menu, app drawer, or swipe-down-from-top Quick Settings list, the result is a clean-looking menu arrangement. Furthermore, there is less bloatware (or pre-installed programmes) than usual.

Because Android 11 wasn’t the most recent version at the time of the Realme C35’s debut – most phone makers are a touch irregular when it comes to updating their budget smartphones – we’ll have to wait and see if Realme continues to support the device.

Battery life of the Realme C35

A large 5000mAh battery powers the Realme C35. As a result, the C35 is one of the longest-lasting smartphones we’ve tested recently, thanks to its LCD 60Hz screen and lack of 5G connectivity.

The phone cruised through a day of use with ease, and it lasted well into the second. This includes a lot of social networking, photography, and the odd app download. 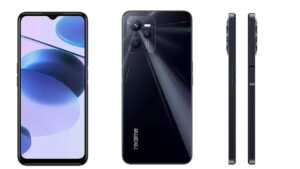 The charging speed is 18W, which isn’t fast; charging the phone to full capacity would take over an hour. This is a handset for people who charge their phones overnight rather than in the morning.

If you want to buy it, you should…

You’re on a shoestring budget.

This is a fantastic budget phone with a screen, CPU, and camera that all outperform its price.

You are passionate about photography.

The 50-megapixel camera on the Realme is excellent, capturing vibrant and brilliant pictures.

You’ll need a phone that can last for a long time.

Because of the C35’s large battery, it will last a long period between charges. It’s ideal for folks who can’t be near a wall outlet.

Your hands are little.

The Realme C35 is a large smartphone. Not only that, but its angular shape is unsettling in the hand, especially when you’re stretching to grab it.

You have the option to spend additional money.

There are more expensive handsets that will be better for photography or gaming if you aren’t limited to low-cost phones.

You’ll need a camera with a very wide field of view.

Many low-cost phones come with ultra-wide cameras for wide-angle shots, but this isn’t one of them.

If this Realme C35 review hasn’t persuaded you that it’s a good enough phone, there are a few additional options you might want to explore.

Realme 9 Pro Plus is a smartphone developed by Realme.

The Realme 9 Pro Plus has more back cameras, a better display, and a unique color-changing shell if your budget features it.

Moto G31 is a motorcycle manufactured by Moto.

The Moto G31 boasts a better-looking screen, but it has slower performance. Overall, it’s a device that’s very comparable to the Realme.

Nokia G21 is a smartphone manufactured by Nokia.

The Nokia G21 is a similar phone with a larger battery, but its screen isn’t as attractive.

The QD-OLED monitor from Alienware establishes a new standard for gaming displays.

How to Download & Install Android 13 Beta on Your Phone

Alternatives to FLVto in 2022 – Sites Similar to FLVto